The Old Curiosity Shop no longer exists and is now a domestic dwelling (39 The Street, Cobham). As well as being a shop, it was also the local Post Office. 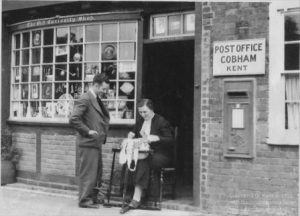 Mrs Hoppe, lacemaker, of no. 39 The Street (picture supplied by Paul Kingman)

The shop sold second hand jewellery, glassware, ceramics etc. which were displayed on tables, they would now probably be called collectables but my mother referred to them as ‘rubbish’!

The outside was painted Post Office red and there was a sign over the window ‘The Old Curiosity Shop’. The bow front window had small panes of glass with the occasional ‘bullseye’ pane and there was a post box in the front wall.

On entering the shop, which was only the size of the front room, the wooden counter with its wire grill was on the left hand side and the telephone switchboard was on the right, in its own little room. Esme Pearce, Betty’s sister-in-law, was the switchboard operator and even after the Post Office was transferred the wire grill remained on the front of the counter. Wooden shutters were put up every evening, by Albert Beckham, when the shop was closing for the day.

The ‘telegram boy’, Albert Beckham lived in Battle Street. He had a bicycle, uniform and peaked cap, all of which were red and black.

Mrs Hoppe ran both the Post Office and the shop and could often be seen sitting outside the shop lace making. She continued to run the shop but the Post Office was taken over by Jack Walker until it was transferred to the sweet shop next to ‘Little Dorrits Café’ which is now a domestic dwelling (45 The Street). Mr and Mrs Wood ran both the café and the Post Office from then on.

There was an entrance at the side of the Old Curiosity Shop building that led to a house at the rear; it had a long garden that ran all the way to the road that leads to the College. Mr & Mrs Morris lived there before they moved to Mill Farm House, now 10 The Street. Mr Morris dealt with milk and probably worked at the depot.

(Betty Bicker-Robinson (nee King) lived in Cobham village from 1938 to 1942 and this is her memory of ‘The Old Curiosity shop’ from that time, as told to Trevor Bent, a member of the Cobham Landscape Detectives project.)