We lived in one of the four cottages that were where the general store car park is now situated and opposite the ‘Olde curiosity Shoppe’ that was owned by Mrs Hoppe who was a lace maker. We had no electricity so had to take a candle with us when we went to bed. My mother would mark the candle, so that we didn’t burn it for too long but sometimes we would re-mark it if we burnt it for longer than we should have.

There were ten of us and money was scarce so our staple diet was bread and dripping or bread and jam.

Little Dorrits café was opposite where today’s General Store is and remember that they used to serve the forces stationed at Cobham during the war.

I went to Cobham School until I was 14 and when I left I went to work in the gardens of Cobham Hall for Lord Darnley where two of my jobs were to plant bulbs in the autumn and pick the very special daffodils in the following spring that were then sold in Lord Darnley’s flower shop at Rede Court, Knights Place, Strood.

Another job that I had was that after snowfall I had to mop up water in the hall that was the result of the snow on the roof melting and dripping through the ceilings. It was here that I first met young Ernie Bicker and fell in love.

My sister, Violet Jacobs, her husband and four children lived in the cottage, called Park House, that had previously been the gamekeeper’s cottage. It was rented to my sister and her husband when the gamekeeper left and although there were still a lot of deer in the woods at the time it was no longer required that a gamekeeper lived there.

The cottage was about 200 yards east of the Mausoleum and on the same track. I think the best way of describing what the cottage was like is by drawing a plan so I have asked my friend Arthur to draw one. 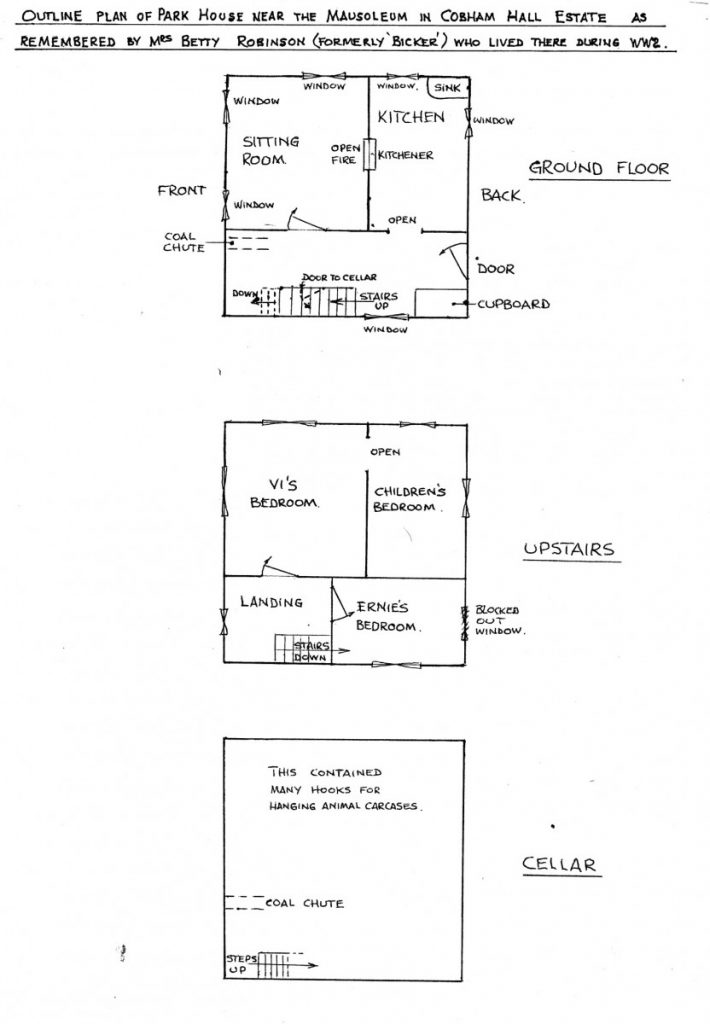 When my sister’s husband was called up to go into the army in 1942 my mother sent me to live with her in the cottage, so that she would not be alone and to help her cope with her four children. The first winter I was there, there was a lot of snow and it was very difficult to get anywhere until it thawed.

At the time, I was courting Ernie, who became my husband in 1947, and I asked his mother if he could move in with us as we felt we needed a man about the house at night for protection. She agreed to this and Ernie moved in. Ernie slept in one of the upstairs bedrooms and I slept downstairs in the sitting room. Hardly the best arrangement for him to protect us!

My mother thought that it was just a crush that I had on Ernie so she sent me off to join my sister Lena in the Land Army in Gloucestershire where I drove Fordson tractors but I only stayed there for about a year and then returned to the village to live with my mother for a while, before moving back to the cottage. I simply couldn’t stay in the Land Army any longer as I wanted to get back home to see Ernie even though it cost me a good hiding with the slipper from mum!

I can remember one day when I was working at Cobham Hall, walking across the lawn on the south front carrying a very big bunch of daffodils, Lord Darnley said “You need a perambulator to carry those in”. I didn’t know that he was suggesting I needed a ‘pram’ as I’d never previously heard it called a perambulator. It wasn’t a problem as I had a barrow that worked perfectly well. On another occasion he told me that I should call him ‘My Lord’ but I don’t think that I ever did!

Before I moved into Cobham Hall I used to ride my bike between the cottage and the Hall four times a day as I always went home for lunch at midday.

Although life at the cottage was hard, with no electricity, main drainage or reliable water supply I loved the wildlife and isolation, we never had any visitors, and enjoyed the time that I lived there.

There was a single storey building to the rear of the cottage. This was known as the ‘bread oven’ building for the obvious reason that it housed a large bread oven. The long handled ‘shovel’ was still there but the oven was not used while I lived at the cottage.

Part of this building was used as the toilet and there were two buckets that had to be emptied in the woods. We kept our bicycles and pram in another part and it also served to house our chicken. 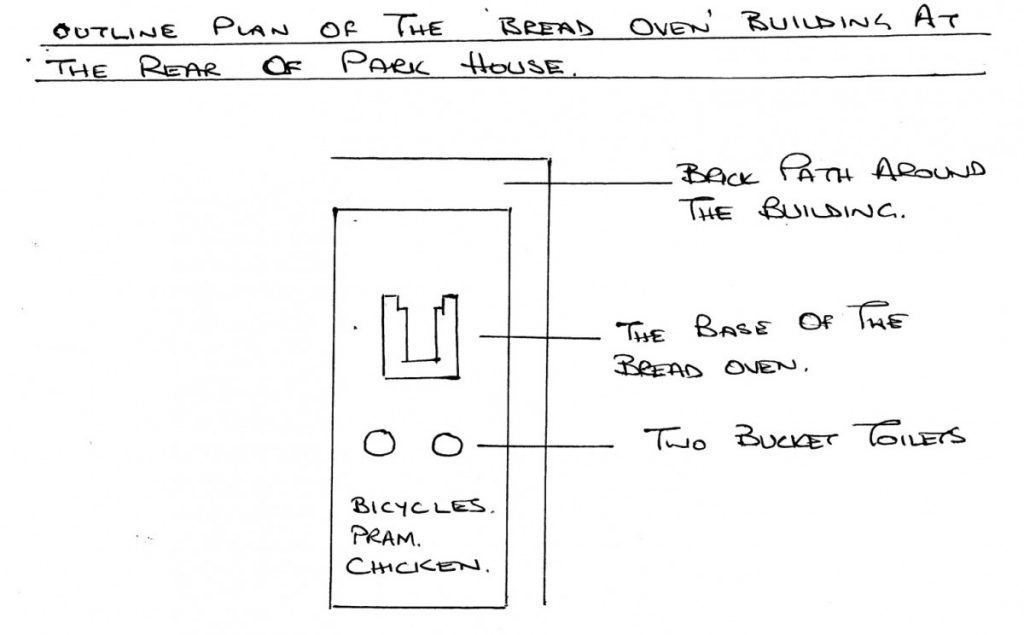 Plan of the bread oven

As most people did, we had a tin bath hanging on the wall and it was taken down and put in front of the fire on a Friday night, filled with water heated on the Kitchener and we all took turns, in the same water!

Sometimes the mains water didn’t reach the cottage and Ernie and I had to carry the bath to Knights Place, fill it with water and carry it back to the cottage. There was always a boggy patch near the cottage so I suspect that there was a leak in the water pipe. This was not the only hard job we had. We also had to cut wood for the fire with a two man saw and then split it with an axe. In the winter we would cut wood in the dark and had to take a torch with us so that we could see what we were doing.

The coalman wouldn’t deliver to the cottage but it would have been quite expensive to buy coal and as money was very tight, wood was definitely the best option. There was a coal chute in the cellar but this was rarely used as we would cut wood as we needed it, virtually on a daily basis.

Apart from the coalman, the postman and milkman would also go no further than the Lodge in Lodge Lane so we were really isolated. My future mother in law lived in the Lodge at Lodge Lane (paying 2/6d a week rent) and would help us out by taking in our supplies delivered from Mr Ganders shop in the village. We could always go to the shop in Cobham when we had the money but we lived mainly on what we grew. I can remember growing cabbages, brussels, parsnips, swede, turnips and carrots in the garden which lasted us the whole year round.

We had to go to the shop in Cobham village mainly for bread, flour and Fussels condensed milk. This was alright when the weather was OK but a real problem in the snow of my first winter at the cottage.

There was a paling fence around the property and we grew all our own vegetables and would snare rabbits, which we were allowed to, and also shoot the occasional pheasant, that we weren’t allowed, but we did anyway! We also kept one chicken, so we had one egg between us all!

There was a brick building next to Brewers ponds that we called the ‘Water House’ but didn’t know what it was used for. There was also a poultry yard with about twelve chickens that was looked after and the eggs collected for the hall by Annie Hall who lived at Brewers Gate.

During the war years there were barrage balloons outside the Mausoleum, which still looked splendid as it hadn’t been vandalised back then. There were ack-ack guns at Lodge Lane that went off quite regularly and when they did the whole house shook!

I saw and heard the V1 (Doodle Bugs) and V2 rockets go over and would listen when they went quiet but I never heard an explosion from one.

There was also a small mound with a few trees on it that was called Peggy Taylors Hill after the name of the lady who hanged herself there. I think that she may have been a maid at the hall and a ‘friend’ of Lord Darnley but I can’t be positive.

After a few years with no reliable water supply, or other services, to the cottage, it became rather dilapidated but fortunately the Chauffeur’s quarters at Cobham Hall were not occupied at that time (as Lord Darnley didn’t have a chauffeur) so my sister Violet, her four children and myself were allowed to move in there. Violet’s fifth child was born there on 27th October 1947.

Ernie didn’t move in with us and went back to live with his parents at the lodge.

Although the chauffeur’s quarters were attached to the Hall, you had to go outside in order to get into the Hall but since then it has changed and there is now direct access into the Hall.

Lord Darnley asked Ernie to look after the electric mains that were near the clock in the courtyard. Ernie wasn’t an expert but agreed that he would. One Boxing night it went up in flames and did a lot of damage, including to the clock. Ernie was worried that he would be blamed but he never was as an electrical fault was thought to have been the cause.

I was still living in the Chauffer’s quarters at Cobham Hall when I got married to Ernie; we were married at Chatham Registry Office on October 14th 1947. Lady Darnley (Rosemary Potter) gave us a wedding cake that she had ordered from the USA and on the morning of the wedding Lord and Lady Darnley came and shook hands and gave us their best wishes. 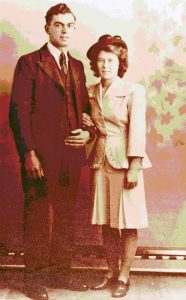 There was a house becoming available in Round Street when we married but the lady who lived there had just lost her husband and we didn’t want to force her to leave. Luckily for us there was a Nissan hut available at Lodge Lane so we moved in there for a few months. Ernie was given a job as a fruit man by Mr Lawrence, the farmer.

When the Round Street house became available we moved to ‘Sunnyside’ Round Street on 1st May 1948 and I’m still here today.