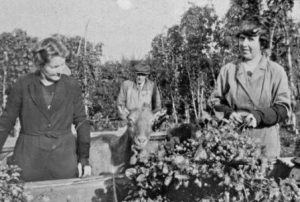 When we were still young, we used to go down to Yalding to go hopping.  We had some good fun.  We used to stay in an old barn next to the pub in Laddingford, The Chequers, the one I mentioned earlier.  All the old Londoners’ would come down and stay in the old hop huts.  There were loads of them.  They would sing all day, filthy dirty most of them and kids galore, I thought they were great fun.  They would pinch anything they could lay their hands on, even chickens.  When hopping pay day came, what a party, they would bring the piano out of the pub and dance and sing all around the pub green.  They all got drunk, even the women!  We used to do the Lambeth Walk with them and the noise could be heard miles away.  Old Tom would come down at the weekends (worse luck).  We only had this one room in the barn.  Lena and I slept in a very old bed in a dark corner, mum had another bed right up the other end, well Tom gets drunk as usual and ‘dirty old sod’ wet mum’s bed through.  We spent all next day trying to wash the sheets and blankets and get them dry.  If I had been mum I would have killed him.

Sunday mornings Uncle Percy would take us over ‘Daddy’s Bridge’ over the river Medway to go in his rowing boat.  Lena, myself, Ruby and Gerald, they were Percy’s two children.  It was lovely, he was very good at rowing the boat.  It was so pretty, all the wild flowers, king fishers and dragon flies also lots of different birds.  We would go a long way and coming back he would let us have a jam jar on a string to dangle in the water to catch really tiny silver fishes.  I loved every minute of it.  I could never understand my uncle Percy, he would talk so fast I didn’t catch what he said.  He and his wife Aunt Lil. He and his wife Aunt Lil would have their dinner on Sundays send the kids out and lock the door then go to bed.  He liked his beer, they must have been very tired don’t you think!

We also used to go hop picking on Mr Pye’s farm at Cobham during the war years, it lasted seven weeks.  Whenever the air raid siren went off and the ‘planes came over we used to have to run in the woods for shelter so that they didn’t see us. Mum would give us ‘hop pocks’ (big yellow sacks) to put on our heads, it made one feel safe but I don’t really think they were any good…still it was all in the mind. 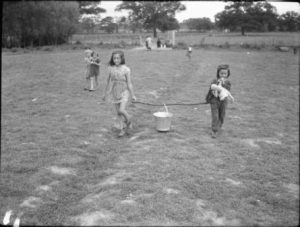 When I worked on Mr Lawrence’s farm, one day a ‘plane (one of ours) tried to limp home to the airdrome but it didn’t make it and came down in the potato fields and killed two of the women workers.  One was my friend Florrie Vouseden’s mum the other was Mrs Redsell’s sister.  It was awful.  Will tell you more later. We had another plane come down at Henhurst and killed Mrs Dine, knocked her house nearly all down.

Mind you it was really frightening, the doodle bugs were even worse.  You could hear them buzzing very loud and then suddenly stop.  Everyone held their breath until you heard the huge bang.  There would be a lot of shrapnel dropping from the big guns which would kill you if they hit you.  I was always scared they might drop gas bombs.  I wouldn’t like to live through that again.  We were the lucky ones.

I wish you could have seen how people were in those days, it was so different.  People always had time to stop and speak to you and always were very helpful.  The good times and the bad I suppose.  Old Tom was the worst thing in our lives, he would always manage to be out of work when mum went hop picking, so he would want half of her money.

One day mum was taken very ill, the doctor came and said she must go to the hospital at once, he was afraid her appendix would burst.  So in she goes.  That night Tom sat in the kitchen with Lena and myself.  He said to Lena ‘Bet will have to sleep with me tonight, look at me.  I am shaking like a leaf’.  I said no way.  Lena said if she does, I’m going as well.   Well this shaking bit I had seen before, as you will remember.   Anyway he made us get into his bed, first time I can ever remember being so near to Lena.  We kept well over our side.  He had been drinking, so we soon heard him snoring.  We quick as we could, got out then heard ‘where do you think you are going’ we just ran in our room and blocked the door so he couldn’t get in.  The next morning about three am (it was damp and foggy) I woke Lena and said ‘come on we are going over to Sole Street to find Vi and Lil’, it seemed a long way but we finally got there, we had a job to wake them up.  We told them about Old Tom, we were also very worried about our poor mum.  They said don’t worry we will see about it, they gave us some food to take to school.  I thought about it all day.  Vi and Lil said don’t tell Tom anything.  We were hardly indoors (Tom was in his usual place right in front of the fire) when in through the door came my brother Fred, Tom got up ‘hello Fred mate’ he said going to shake hands with Fred.

Fred got hold of him by the throat and gave him such a bashing his nose was bleeding.  He dropped to the floor and begged Fred to forgive him.  Fred said ‘if mum wasn’t so ill I would kill you, if you ever try anything again I will come back and finish you off’.  He took us to one side and said ‘don’t ever tell mum what has happened, but you tell me if he does or says anything to you again, I don’t think he will’.

Well we go to the hospital on Sunday to visit mum, who was doing quite well, she said ‘poor dad fell over and hurt himself and he’s got a very sore throat, he has a job to talk’.  Lena and I just looked at one another. It was a lovely feeling to see him look so uneasy.   Forever after that he was very wary of what he said and did.

Now it was very clear what had been going on, he had no doubt tried his tricks with all of us, Glad, Ivy, Lena and myself.

It was also clear to me now why Ivy had died.  I was not supposed to have seen the newspaper but I did the day after Ivy died, on the front page of the paper the headline read ‘Girl Commits Suicide’.  I know in my heart that it was what Ivy had done, knowing her as I did, but they brought in the verdict as an accident.  I hated Tom even more.

Soon after this Vi came to live next door to mum. Dolly Mrs Knight’s sister moved away.   Lil came to live opposite the Darnley Arms.

Before I met Ern I had several boy friends like you do.  I fancied Roy Morris and Stanley Jackson.  Then at different places Teddy Tall, Bobby White, David Ralph, Ken Knight, Len Barden and my Norman Beckham.  My Norm was lovely, he had very black curly hair and really blue eyes, he was really nice but he was so shy he would go bright red whenever I spoke to him.  He had three brothers, one died at twelve and another was killed in the war.  I fancied Ern, I told Norm and he cried, I felt really mean. When he was old enough he joined the army and was sent abroad where he was very badly wounded and sent home for a long stay in hospital in Blackburn.  His mum used to live in Battle Street, Cobham.  I’ve only seen him once since then and it was not to speak to.