The family and Ashenbank Camp

My Mum was born in Glyncorrwg Wales, and Dad was born  in Houghton-Le-Spring County Durham. I was born in Chesterfield, Derbyshire on the 26th September 1944. I have an elder Brother Ray and four Sisters, Eunice, Rita, Linda and Sandra. After the war, with Mum and Dad’s approval, Ray was naturally adopted by Auntie Dora and Uncle Len they migrated back to Guernsey, Uncle Len’s birth place.

Mum, Dad, my elder sister Eunice and myself lived for a while in Lynton road South Gravesend, we then moved in to a disused RAF camp in Ashenbank woods, the hut had been Officers Quarters when the RAF were billeted there. I have been told that we were the first squatters on the camp but I can’t confirm it, our address was 34 Laughing Waters Cobham Kent. In later years my three younger sisters were born while we lived there.

It was a single storey wooden hut with a tarred felt roof, the inside was painted cream and there was brown lino on the floor. I can’t quite remember the layout of the building but there was a passageway along the centre of the building with three rooms on either side of it. Looking at the hut from the front, the kitchen was on the left, the living room was next, I can’t remember the third room at the front but the three rooms at the back were bedrooms. I can remember my dad building a bed out of timber that he brought home from work.

Unlike most of the buildings that had to share toilet blocks, we had our own toilet a short distance from the hut [to the left of the tree in the photo ]. There was no bathroom but we had a tin bath which was filled from water boiled on the Kitchener. 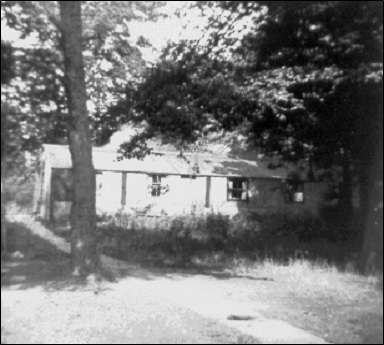 Life in the area

When I started at Cobham Primary School I caught the bus at Shepherds Gate into Cobham village. Mr Aldridge was the headmaster of the school, a very stern Yorkshire man. He is the only teacher that I can remember the name of. Mum would use the bus for her shopping trips to Gravesend. It went via Halfpence Lane, the Tollgate and on into Gravesend.

There was a general store on the site, which had probably been the NAAFI building as it didn’t look like the rest of the huts. We could also go into Ganders general store in Cobham village.

Mum worked for Lord Darnley as a domestic in Cobham Hall and at Scalers Hill House. As a family we would gather sack loads of Chestnuts, which I assume Lord Darnley sold. Mum also worked at some time at the Laughing Waters Restaurant just off the A2, it is now known as the Inn on the Lake. Dad turned his hand to various jobs including as a Blacksmith and window cleaning. We also helped as beaters for pheasant shoots on the estate.

I don’t remember many names from the camp except for the Tovey family who lived next door to us, they had a daughter Susan that my sisters played with, also there were The Murrells on Camp site 5 and the Coleman family who lived in the area of hut number 40/42 (Mr Coleman was a coalman!).

There were no playgrounds in the camp, nothing put on for the children so we had to make our own entertainment, except for the Christmas party at the Meadow Rooms in Cobham village, and the occasional film show in the loft of the village bakery – that was quite an exciting event.

Inside Shepherds Gate there was a thatched roof cottage with a large barn. We played in the barn on bales of hay and old farm machinery that were stored there. nother place was the Brick Kiln ponds, one winter when the ice was so thick we were jumping up and down trying to break it, luckily we didn’t, or we might not be here now.

We used to watch the Blacksmiths in Cobham village shoeing the horses while waiting for the bus home from school, occasionally we used to go to the bakers for a ‘penny bag of stales’, in those days they used to be able to sell stale cakes! Blackberry picking at Scalers Hill was another summer pastime.

Sports car and motorcycle time trials were held, starting in large silver sand hollow near the bridge that now crosses the A2 to Thong lane. The motorcycles and cars would scramble up steep inclines sometimes not making it to the top, down steep banks and through muddy water filled ditches on to roads at speed through the woods. Being mischievous children we took great delight in turning round the marker flags.

There used to be a tea wagon parked on the A2 where lorries pulled in for a break, and at weekends coaches would pull in for a halfway stop on their way to the coast, they would get out crates of beer and food and have a jolly good booze up.

On the left hand side of a lane leading downhill from Brewers Gate to the golf club (probably the Old Roman Road) there was a high sand bank where Sand Martins nested and a stream with watercress growing in it on the right hand side. Further in the woods towards Cobham Hall I recall a sunken white tiled area, possibly the area marked on the Ordnance Survey map as fish pond.  When the A2 was widened in 1960, I wasn’t surprised to hear that there were problems with subsidence in this area due to the sandy banks. 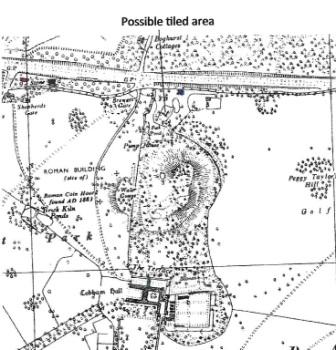 We probably moved out of the camp in 1955/6, confirmed by a family postcard dated 21.3.55 with 34, Laughing Waters as the senders address and also a medical certificate for my sister Rita from  Northcote Primary school dated 21.6.56.

We were offered a new house in Higham but we didn’t take up the offer. With my father being in and out of work it may have been too expensive and moved to Shamrock Road in Denton instead.

One of my main playgrounds was the clay works in what is now Shorne Country Park but that’s another story.

Jack talks about the clay pits in Shorne Woods

I have fond memories of my sisters and friends playing in the clay works on the other side of the A2, now known as Shorne Country Park. We used to watch the big digger load buckets full of clay onto the rubber conveyor belts that ran on two short V shaped upright rollers and one wide flat one underneath to move the belt. There were large gaps between the clay on the conveyors while the digger dug the next load so we used to jump on the belt for a ride but were often chased off by an employee. The belt ran right across the clay pit from the Brewers Road end to the slurry tank near the A2.

From another part where clay was dug there was a small narrow gauge railway track with an incline up to a large hopper. The engine was possibly a coal fired box shape. It hauled V shaped wagons which had a central pivot up the incline and they could tip either way up into the hopper, where they were tipped out to a fleet of open back lorries waiting below. I think each wagon load was one lorry load. They were then transported off possibly to Aylesford.

When work finished for the day we would play on the tipper wagons rocking them from side to side. I also recall helping ourselves to coal from a large heap that was used to fire the engine. In the summer months we had hours of fun playing in the rain water pools that were only waist deep. 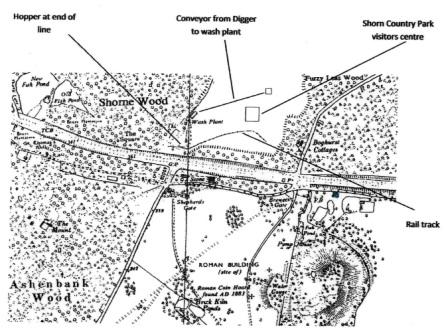 I recall a wide gravel path on the Shorne side of the A2 between Camp 2 and the Clay works going through Shorne Woods, leading down to a gatehouse at Thong Lodge. The path had iron bar fencing each side typically found on the Darnley Estate, there were red, yellow, white and pink rhododendrons growing on either side of the fencing.

3 Responses to Jack Hollis: memories of Ashenbank and Shorne Woods