My Gran and my Mum

Emma Saxby was my mum.  She was born on the 5th May in the year 1883 at East Peckham, her mother was Elizabeth Saxby formerly Master.  Her father was William Saxby, a sweep.  When she was a child she lived in Laddingford, Yalding.  She had one brother called Percy.  She often spoke of him (although there were about nine of them altogether).

Getting back to Percy…one day he took a pellet gun and shot a duck on a pond and took it home for them to eat.  Gran said you could have shaved it, it was so thin.  The next day the police came and took poor Percy to spend a holiday in Borstal prison for a few weeks.  He was always up to pranks.  When he was about seven he would go into the Medway River on his way home from school.  Gran was really fed up with the worry of this so one day she waited in the bushes, sure enough along came Percy, off with all of his clothes and into the river.  So Gran took his clothes, found some stinging nettles and called him out.  She then made him run naked all through the village and every time he stopped she touched him with the nettles.  This put an end to his trips in the river.

One night they all went singing carols, when they went to the Baker’s shop he was very kind and said if you sing well I will give you five shillings, which he did.  They came away right pleased with themselves.  When they got along the road Percy said ‘look what I’ve got for us to share’ he had pinched a large loaf of bread on his way out.  They didn’t tell Gran, they had eaten it before they got home.

My gran was a little person but you never spoke out of turn to her. I only ever saw her with a large black hat on at all times.  I often wondered if she kept it on at night.  She had a long black dress and button up boots.  I never saw her arms or legs, bare I mean.  Her little cottage was lovely.  There was a small hump bridge over the stream to go into her garden.  I suppose it was more a large ditch.  Her house was covered in passion flowers she used to tell me the story of how it came to be called the ‘passion’.   The flower with the crown of thorns on Jesus’s head, three nails where they put him on the cross and the disciples who were with him when he died.  I thought Gran was very clever.  She used to take medicine, everyone those days came in a little bottle, it looked like red water.   She said to me it tastes like poison. I would be very clever and say ‘have you ever tasted poison Gran’ she would say ‘no my girl but it couldn’t taste worse’, so once again I was put back in my place.

Her lavatory was right down the bottom of her garden, it was a small tin shed with a large hole under a very old wooden seat, the nail on the wall had newspaper cut into squares for use.   When it rained it was so loud on the roof if you didn’t need the toilet before you certainly would then.

There were lots of wild kittens, you could never catch them, they would spit at you but they were very pretty.  There was one shop in the village that sold everything, it was called Brenchly’s.  I never went into it I never saw my Gran go in either. Money was short in those days.

Getting back to Percy, when he was about sixteen years old and getting pretty cocky about himself, he went out in the evening and would come home late.  Mind you the lanes were very dark and very lonely.  He would never be home on time eight o’clock, it was winter so it was cold and dark.  One night Gran was so worried and mad he was very late, so Gran went to look for him.  She put a white sheet on and thought ‘I’ll give him the fright of his life, he will be glad to get home on time’. She hid in the hedge until he came along, he would whistle to make out he wasn’t afraid of the dark.  Just as Gran saw him coming she put the sheet over her head, arms outstretched and did an awful moaning sound.  Percy did no more, he pulled a stick from the hedge which was a bit of an old fence and hit Gran over the head and ran home for his life.  When he got home the others, who were waiting eagerly to find out what happened, said ‘have you seen mum’, ‘blimey no’ he said ‘I’ve just hit someone over the crust’ (which he called head).   When they all went out poor Gran was knocked out cold. I think they were both sorry but Percy stayed home after that until he was really grown up.   Mind you I think he had to change his trousers when he got over the fright of it all.

My Gran had been married twice, her first name was Waghorne and then she married a man called Saxby.  We were never allowed to ask anything grown up.  Before Gran went to bed every night she lay the table with all the things for breakfast, cups would be placed upside down on saucers and a white cloth placed of the top of it all.  She would be up at daylight the next morning.  She would never kiss us or even give us a hug.  I was mostly afraid of her.  We would just have to sit on a chair and be quiet.  I cannot remember Granddad at all.

On October 14th 1905 my mum was married. She was aged twenty two and called herself Emily, she did this because everyone had always called her Emily. It was later discovered that she had been Christened Emma. She married John Norton who was twenty five, his father was Thomas Norton.  Mum’s father was William Saxby.  Richard Norton (Thomas Norton’s brother) was Best Man.  Charlotte Norton (Richard’s wife) was also there.  They were married in the church in the parish of Yalding and lived in Collier Street, Yalding for the first part of their married life.

Now I will go back to when my mum was fourteen years old, in those days you did what you were told, there was no asking about anything.  So on leaving school mum went into what they called ‘Service’, which really meant you were a lackey for any job they liked to give you.  It didn’t matter how far away your work was you had to walk there.

Mum was sent to a very large house, it was a very old rambling place and mum had to sleep very high up in an old attic, one other girl, a bit older than mum slept with her.  Very late and very tired that first night up to bed they go.  The other girl said to mum whatever you do, DON’T GO TO SLEEP, mum was dead on her feet, what with the long walk to get to this house then the scrubbing and cleaning all day, she said ‘but I’m very tired’.  ‘Well if you do, they will bury you alive’.  Mum didn’t believe her, but at the same time she wasn’t going to chance it, so the girl said I will take you out early in the morning and prove it to you.  So sure enough early next morning off they go before anyone was about.  They went down the lane into the very old church yard.  Mum could not believe her eyes because sure enough on every tombstone was ‘so and so fell asleep on such and such date.  Not just one but all of them. ‘Told you so’ the girl said.  I think mum thought ‘well I can’t go home or I will be joining them’.  Anyway she stayed there for a few years.

When she left there she worked at the King and Queen pub, which by the way is still there.  She did housework or whatever was needed.  It has got a big window overlooking the street mum said they used to call out to the boys going by.  Then she met John Norton, she would tell me how they walked everywhere, he would catch her when she jumped over the ditches to go across fields.  On Sundays she would meet the landlady of the Chequers pub in Laddingford, they would put on very ‘posh’ hats and go in her horse and buggy to chapel.  Her name was Mrs Burton.  They wore large hats with tulle netting tied under their chins.  Mum really loved it.  The pub is still there.  I will tell you more about that later. 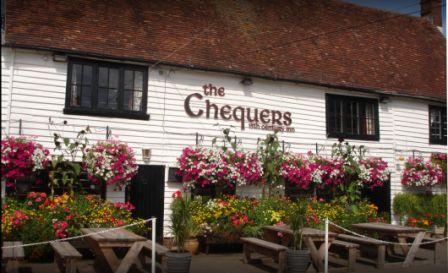 Now getting back to Collier Street, mum lived there quite a few years.   Soon after getting married she had a baby girl named Doris, followed by Gertrude, then Frederick, then Violet, followed by Lillian.  Times were very lean.  Her husband started to get very bad headaches.  There was a very bad epidemic of diphtheria, everyone was losing children, some as many as five in one family.  Anyway Doris became very ill and everyone thought it was diphtheria, but after she died they found it was toadstool poisoning, her little friend died on the same day, they must have eaten them on the way to school, but with so many ill with diphtheria they just presumed it was that.  I suppose they didn’t bother too much in those days, it was nothing when children died.  Nearly everyone had lost one or two in the family.  When you look in the church yard those that could afford headstones you can see just how bad it was. Poor mum it must have been heart breaking.

Soon after Lil was born mum’s dear husband John died.  He had meningitis.  Now she has those children to bring up with no money and no help.  On the day of the funeral Gert and Fred wearing very large armbands had to walk from their house to the church yard, they had to walk very slowly behind mum who wore black ‘widows weeds’, which was black stockings and shoes a large black hat with a very large veil that covered her face and hung all over her shoulders.  Gert was told to hold Fred’s hand very tight.  The coffin was placed on a cart and the cart had rubber wheels, so the only sound was the black horse’s hooves.   By the way, before they left the house they had to go to see their Dad in his coffin to say goodbye.  There was a big jar of lilies in the room to help with the smell, this was tradition.  Curtains were drawn and a lighted lamp left on the table to ward off any evil.   Mum must have been very brave.

This entry was posted in Oral History and tagged social history. Bookmark the permalink.