On Sunday the 13th March 2016 a group of young enthusiastic archaeologists (YACs) conducted a dig on a demolished  WWII RAF Camp within the boundary of Shorne Country Park. One of the young members of the group found a model battleship (below).

Originally we thought the model battleship was  of a Leander Class Cruiser but a friend’s son-in-law, who has a good knowledge of  Royal Navy Ships, pointed out the toy ship was in fact HMS Vanguard made by the Crescent Toy Company (below). 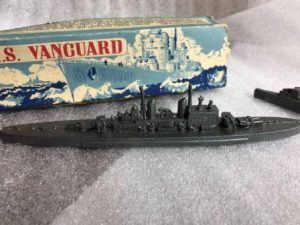 History of the HMS Vanguard

1Work on HMS Vanguard Fast Battleship’s design was begun before the start WWII in response to the possibility of the Royal Navy being outnumbered by a combined force of German and Japanese battleships.  Work on the ship started and stopped several times during the war and even after construction had begun, her design was revised several times to reflect war experience, notably the loss of the battleship Prince of Wales and battlecruiser Repulse as a result of being attacked by Japanese aircraft.

2When the war in Europe ended come May of 1945, the decision was made to complete her in case the war in the Pacific against the Empire of Japan dragged on. As such, Vanguard was launched in 1944 but not formally commissioned until August 9th, 1946. She was larger than the preceding King George V battleship – heavier, bigger and with greatly increased armament capability. The King George V-class of battleships each held 14-inch main guns and, with the development and use of 16-inch guns by the United States and Japanese navies, the King George V-class was suddenly viewed as under-armed. The British Admiralty looked at 16-inch guns but the time needed for development and manufacture of such new rifles made the decision mute.

Britain had a number of 15-inch guns available so it seemed the best fit for a new design with the war winding down in Europe. Many publications originally indicate the 15-inch guns were removed from HMS Courageous and HMS Glorious and that these vessels were then converted to aircraft carriers. However, the Admiralty kept strict documentation on each gun and new reviews have come to indicate the guns came from five battleships and one monitor: two from HMS Queen Elizabeth, two from the HMS Ramillies, one from HMS Royal Sovereign, one from HMS Resolution, one from the monitor HMS Erebus, and the last from the famous HMS Warspite.

The 15-inch guns were doubled across four turret emplacements, these held as two forward and two aft installations. The new Vanguard had 16 x 5.25-inch heavy secondary guns for close-in fighting, these situated as 8 x double mounts, four fitted to port side and four along the starboard. The Vanguard had the most anti-aircraft guns onboard than any other ship in the British Navy, counting 73 x 40mm Bofors type cannons. Despite this formidable array, the Vanguard would never fire her guns in anger throughout the remainder of the war.

Vanguard served as flagship to a number units she was attached to, included the Mediterranean Fleet and the Home Fleet Training Squadron.

During a refit in 1955, the Admiralty announced that the ship was going to be put into reserve upon completion of the work. She was latter sold for scrap and was broken up beginning in 1960.

3The Crescent Toy Company was a British manufacturer  of die cast toys founded by Henry George Eagles and Arthur Schneider in 1922 and was located at 67, DeBeauvoir Crescent, Kingston Road, London.  As well as toy ships they manufactured lead (hollow cast) figures and animals, vehicles, toy guns, and later plastic figures and toy soldiers.

At some point in the 1930s, one of Henry’s brother, Arthur, joined the Company under the name of Mr. Harvey to avoid suspicion of nepotism and worked as a foreman in the lead casting shop.

It is understood that Arthur Schneider emigrated to America during the early part of the second world war due to connotations with his German surname.

Unfortunately Henry’s health deteriorated and he died in 1942. The running of the business was taken over by his brother Arthur (Mr Harvey) aided by Doris Eagles, one of Henry’s four children.

During the war years the company manufactured munitions’ parts. At the end of the war, Henry’s two sons, Harry and Ernie, who had served in the armed forces, joined the company along with their younger brother Frank and they together with their sister Doris, the Company Secretary held the controlling interest.

With an eye to the development grants, then available for industry to move to Wales, in 1949 the company  opened  a factory in Cwmcarn.

Discord between the families got rather bitter and ‘Mr. Harvey’ set up The Harvey Toy Company in Commerce Road, Wood Green, in the name given to him by his brother many years before.