I was six weeks old in 1928 when we moved to Shorne, my father, Albert Swaisland, worked for the village baker and we lived on the premises, the bakery was at the rear of the shop and was where No. 17 The Street now is. We moved to Pear Tree Lane in 1945 to run a dairy farm after he had to leave the bakers due to ill health caused by the accumulated damage that working with flour had done.

I started school at the age of five, the school was built in 1872. There were seven boys living next door to us and I soon became one of their ‘gang’ and spent many hours exploring in the woods. The Shorne/Ifield Road side of the woods was very dense. The Carriage Way came out of the woods next to Baynards Cottage at Hartshill on that road. The wheel ruts were still visible when we used to go there. It used to go all the way to Brewers Gate at one time but that was before the clay extraction took place. 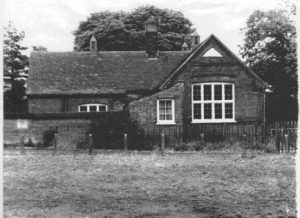 I can remember being taken to see Randall Manor in the late 1930’s, I think this was possibly at Lord Darnley’s invitation as he was a School Governor and visited the school regularly, especially for celebration days and PE demonstrations, this finished after the war started. During the war  we had to share the school with the evacuees which meant we only went for half days, mornings one week and afternoons the next.

The ‘Crows Nest’ was built by Lady Darnley near Harts Hill, which had a clear view of the river, so that she could see her son, Ivo Bligh, set sail from Tilbury on his way to Australia to play cricket for the ‘Ashes’.

The army moves in

The army moved into Shorne in 1941, first the Royal Artillery arrived and then the Durham Light Infantry, together they commandeered the village. Several houses were taken over by the army, The Woodlands and Munilly in Woodlands Lane and also some houses in Pondsfield Lane that had just been built and were still empty were used by both Canadian and British Army officers. The brick road into the woods, from Woodlands Lane, was put down by the army, it went quite a way into the woods but I don’t know how far as we were never allowed in there. The concrete road into the woods from Brewers Road was laid there by the clay works people.

The army boys became the life and soul of the village holding dances in the village hall and their band played Sunday mornings, near the Rose & Crown, after church service. On one Sunday morning their mascot, a big white goat escaped and chased my mother but luckily it didn’t catch her. Our house was always open house for all the service men, my father would often bring men back with him for supper after he had been to the pub.

The NAAFI was in a tent on ‘The Common’, we were taken there for film shows and given bars of chocolate by the soldiers. One night some soldiers dared me to go round the churchyard, they didn’t think I would do it but when I did they gave me a pound for doing it.

Apart the chocolate given to us by the soldiers we were also occasionally given venison by the village policeman, I think he must have been the local poacher, or at least known who it was and kept quiet for some of his ill gotten gains.

A really large area of the woods along both sides of Brewers Road as well as on the west side of Woodland Lane was full of both big brown bell and ridge tents, I’ve always understood that there may have been up to 500 soldiers living in the camp but I can’t be sure of the figure.

There weren’t many bombs that landed in Shorne but one fell in Brewers Road and one by the school in Mill Hill Lane.  There wasn’t any restriction on local travel but when we went to Strood we had to show our Identity Cards as there was a barrier across the road at the Coach  & Horses pub at the top of Strood Hill.

There was a searchlight on Mill Hill where there is still an indentation in the ground where it was and the base for the machine gun is also still there. There was also mobile anti-aircraft guns mounted on the back of lorries parked by the Rose & Crown that would be used where they were needed when there was an air raid on, the Mill Hill searchlight would show them where the planes were.

We slept in the cellar of the bakery shop during the war, we did have a Morrison shelter but that filled an entire room and my father said we weren’t going to have that and that we would sleep on the cellar. We had mattresses on the boxes of emergency rations that were stored in the cellar in case of the village being cut off. There were usually about 7 or 8 of us sleeping there, including 3 or 4 evacuees from Strood. I’m not sure but I think it would have been the Air Raid warden’s responsibility to hand out the rations if the occasion arose but luckily they were never needed.

Both my father and husband were in the Home Guard and their duties were to guard the radio stations at both Boghurst Cottage and Ashenbank Wood. I can remember the radio tower at Boghurst Cottage, it looked very much like an electricity pylon with antennae on the top. I remember it being quite tall as it could be seen above the tops of the tallest trees. The concrete radio station building at Boghurst Cottage was used as a scout hut after the war; it wasn’t very big, perhaps 12 feet long and 10 feet wide. It was eventually pulled down when Brewers Road was re-routed. 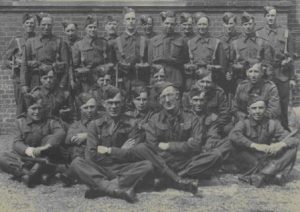 Photograph of the Shorne Home Guard

Names in the photo above include:

[Nothing to do with any of the above but the triangle of land bounded by The Ridgeway, the track that ran from the Ridgeway to Woodlands Lane and Woodlands Lane was called ‘The Whence’, why I’ve no idea and is now known locally as ‘Common Rough’ – a whence is the name for a junction.] 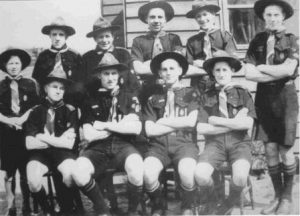 Names in the photo above include: