The Cobham and cricket connection

During the first week on the Mausoleum cottage dig we uncovered a number of small finds, including the ceramic base of what might be a mug (vase?). The decoration on the mug seems to show the bottom half of a kangaroo holding a cricket bat angled towards the ground and has the word ‘CRICKET’ around the base. This is the perfect object to help us explore the history of the Cobham landscape as it turns out there is a strong connection between the game of cricket and Cobham Hall. 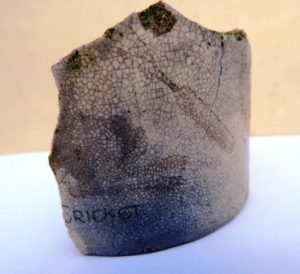 The Cobham connection to cricket

The term ‘Ashes’ was coined in August 1882 when England lost a cricket match to Australia, when playing at the Oval ground in Surrey, UK. The next day the Sporting Times printed a fake obituary satirising the results of the game saying:

“The body will be cremated and the ashes taken to Australia”

Hon. Ivo Bligh (b.1859-d.1927, 8th Earl of Darnley) travelled to Australia with the intention of getting the Ashes back and in doing so, captained the English and Marylebone Cricket Club (MCC) team in the first Test cricket series against Australia in 1882.

Bligh achieved his goal on Christmas Eve 1882 and was given a small terracotta urn as a symbol of the Ashes, after beating the Australian cricket team at the Rupertswood Estate outside Melbourne. The ashes were not the only thing he won in Australia. He also won the heart of Florence Morphy – companion to Lady Janet Clarke (mistress of Rupertswood) and governess to Clark’s children.

In February 1884, Bligh married Florence, returning to England shortly afterwards. Bligh regarded the ashes as a gift, and kept them on his mantelpiece at Cobham Hall. On his death Florence gave the ashes to the MCC (Lord’s) in accordance with her late husband’s wishes.

The Cobham / cricket connection is developed knowing that Ivo Bligh probably learnt the game from a workman at Cobham Hall in his youth. Gravesend born George ‘Farmer’ Bennett (b. 1829-d.1886), a professional cricketer and excellent round-arm bowler, had been part of the first cricket tour made to Australia. He later worked at Cobham Hall as a bricklayer and it is believed he played the game with the young Bligh.

We hope to find out more about how our cricket mug fits into this story of cricket and Cobham.