I was born in the yard of the Pelican pub in Strood and was always told that a zeppelin going over brought on my mothers labour and hence my unexpected birth. My birth certificate confirms my place of birth.

My father was a regular soldier and consequently we moved around England in various army camps and ended up in Chatham where I worked for Shorts. I joined the army in 1938, following in my fathers footsteps and served until 1943 when, with the birth of my son I was discharged.

During the war I became a sergeant and my duties,  until  the  war ended, were  to  take rations, by lorry,  to the gun  sites all round Kent. The main distribution centre was at Southill RASC on the  Maidstone Road  in Chatham. 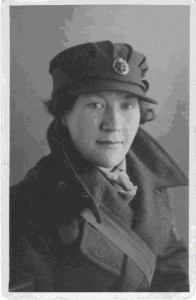 After I lost my husband, who was killed at Arnhem, I went to live with my parents in Leicester.

I really wanted to come back to Kent so went to stay with a friend in Wainscott. I re-married another soldier, Jo Dodd and applied for a council house, there were very few available but we were offered a place in a hut at what had previously been a WWII air force camp in Cobham Woods and moved in around 1947–48 eventually moving out in 1953. Our rent for the hut was 8 shillings a week, our rent for or brand new council house 23 shillings a week.

We didn’t really know what the accommodation was going to be like when we accepted the councils offer but all in all it turned out to be relatively comfortable. The worst aspect was that the washing and toilet facilities were in a separate block and shared by between 4 to 6 huts. We had to make a rota so that everybody knew when the facilities were available to them and we also all had to take our share of the cleaning duties.

The hut was completely empty, except for the range, when we arrived so we had to find our own furniture, we managed to buy most of ours from Whites storeroom, which was next to Wingetts, I was able to do this with some finacial help from my Dad.

There was electricity for heating  and one small electric plate to cook on but no gas. Most of the cooking had to be done on the wood burning range. We weren’t really supposed to collect wood, even though the site was in the woods.  Lord Darnley, the landowner, didn’t approve but we were lucky that the gamekeeper looked the other way when we went to collect some. A lot of the trees in the woods were Chestnut so in the autumn we were able to collect the chestnuts and cook them on top of the range.

The range had a water tank on the side so we had hot water when we needed it. This meant we could bring the tin bath in and have a bath in front of the heat from the range. This was very nice in the winter but in the summer we still had to have a fire if we wanted hot water.

There were good roads round the whole site with pathways leading off  to each hut. The huts were of a wooden construction with the whole building, not just the roof,  covered with roofing felt. When you went into the hut there was a passage that went all the way through into one very large room, we put up our own partitions and divided the hut into two large and two small rooms, much more like a home. The internal walls were made of plasterboard and the décor was typical army, brown lino, dark brown paint on the bottom half of the wall with a light top half. Some of the huts were damp but we were lucky, No. 54, our hut, had no problems as we were on a slope which meant any rain water ran away down the slope.

Most people kept their huts nice and tidy and some people tried to make their own gardens but the rhododendrons were a problem, as not much would grow, so we just had a small rockery.

We would often hear deer crashing about at night but it was never a problem and once we knew what it was we got used to quite quickly.

There were big air raid shelters on the site and the children loved playing in them, the whole site being their playground for, nice and safe with not many cars around.

There was an hourly bus service from Halfpence Lane but I rarely used it as I rode my bike and took my son to nursery and later to school, in a seat on the back, and then cycled to work in Strood. Firstly at Goodworths Greengrocers and then at Wingetts, as a canteen cashier. Many times in the winter I had to walk when I couldn’t cycle because of the snow. One of the perks of the job was that I was given food and the cooks made up dinners for the weekend for me.

There was a general store on the site where we were able to buy most of  our basic provisions and the milkman came round with his horse and two wheel cart, we had to take our jugs out, there was no bottled milk available then. 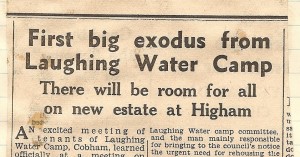 We had a community room in one of the huts where we had weekly dances, everybody joined in bringing food for the evening, occasionally we had live music but usually it was records. The room was also used for meetings and also to meet with councilors to discuss our problems and when our re-housing would take place. There was one person, Farmer Lawrence, who was fantastic at meetings and would rattle the councilors when we needed repairs doing etc.

We all put a bit of money in and formed a site committee to buy a typewriter, stamps and stationery etc. so that we were able to write to different people to pressure them about our re-housing. We formed a committee with me and Jo, the Duffs and the Pearces and we became the driving force in our re-housing battles. One of the committee members, Mrs Sutton, our media correspondent, helped a great deal by ensuring that everything that happened was printed in the local papers

We were helped by Richard Ackland, the local MP, who took up our case in the Houses of Parliament and I’ve no doubt he helped in hurry things along.

My husband Jo oversaw everybody leaving the camp to be re-housed, there were 50 families all together.  Ten were re-housed in Gravesend, one in Northfleet and the rest in Higham. The last families to leave the camp were finally re-housed in 1954.

As told to Trevor Bent (a member of Shorne Woods Heritage Group) in March 2010. Laughing Waters was located on the site of the ‘Inn on the Lake’.