Prehistoric objectives in the Cobham Landscape and its environs

Systematic fieldwalking and investigation in available areas in the Luddesdown valley:

To the south of the Cobham Landscape is a valley made by a former tributary (“the Luddesdown River”) that once entered the Medway from the west at Cuxton.  Cuxton is the site of prolific palaeolithic finds in the 1960s, 1980s and more recently, from a small area of former terrace deposit of the Medway.  The most notable feature of the wider area is the general lack of palaeolithic material and deposits, other than the single spectacular site of Cuxton. The key questions are: is this because there is nothing there? Or is it because we haven’t yet identified and investigated potentially relevant deposits? There may be other small, unmapped outcrops of terrace deposit in various places.

Two places of high potential on this basis are: (a) up and down the main Medway Valley in the vicinity of Cuxton; and (b) along the flanks of the dry tributary valley that enters the Medway from the west at Cuxton, coming from Luddesdown and hence here provisionally named the Luddesdown River. Although there is now no stream in this valley, it must have contained substantial drainage periodically through the Pleistocene, and terrace remnants may be preserved at various places along its flanks. This suggestion is derived directly from the Medway Valley Palaeolithic Project final report which also proposed the following project:

“Most of our current understanding of the Palaeolithic of the region comes from stray finds and amateur collection from quarries. However this knowledge results from the unstructured activities of a few individuals, mostly many decades ago. Some areas have been intensively searched, others on a one-off basis but most not searched at all, particularly higher terrace spreads in the Medway Valley and its tributaries. The region is agricultural in places, with some arable fields that may regularly be available for field walking. A project could be developed that applies a systematic and controlled field walking survey of Pleistocene deposits through the Medway region. This may (a) pick up entirely new significant concentrations/sites [for instance the major new Wiltshire site of Harnham was found following identification of a concentration of handaxe finds in a ploughed field] and (b) would lead to a more balanced view of the distribution of Palaeolithic remains and settlement across the region. Such a project could also serve as a useful means of engaging with local archaeological groups and museums and promoting wider understanding of and interest in the Palaeolithic and Pleistocene.” 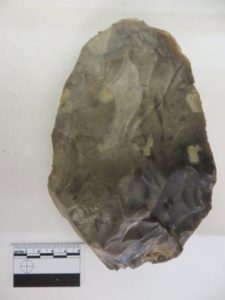 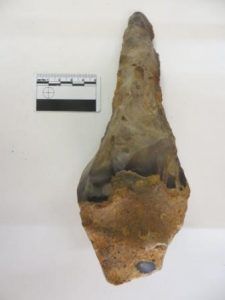 Systematic fieldwalking around Ranscombe Farm on the Clay with Flints:

The patch of Clay-with-flints in the northeast of the area at Ranscombe has produced quite numerous handaxes, now in Rochester Museum with shapes varying from pointed/sub-cordate to cordate. This material can be regarded as residual. None of these handaxes can have moved far from where they were originally discarded, but, stratigraphically, they form part of a palimpsest of material in which all finds from the last 500,000 years (and any of even greater antiquity) are combined into a single horizon. Thus, they represent Palaeolithic activity on the Clay-with-flints plateau, although they cannot be linked to any period of activity, which lessens their value for current research. (Also quoting from the Medway Valley Palaeolithic Project final report.)

The Clay-with-Flints Formation is a residual deposit formed from the dissolution, decalcification and cryoturbation of bedrock strata of the Chalk Group and Palaeogene formations and, in the extreme west of the outcrop, the Upper Greensand Formation. It is unbedded and heterogenous. The dominant lithology is orange-brown and red-brown sandy clay with abundant nodules and rounded pebbles of flint. Angular flints are derived from the Chalk, and rounded flints, sand and clay from Palaeogene formations. There is commonly a discontinuous basal layer up to 100m thick, with dark brown to black matrix, stiff, waxy and fissured, with relatively fresh flint nodules stained black or dark green with manganese or glauconite. The deposit locally includes bodies of yellow fine- to medium- grained sand, reddish brown clayey silt, and sandy clay with beds of well-rounded flint pebbles, derived from Palaeogene formations. (Source BGS) 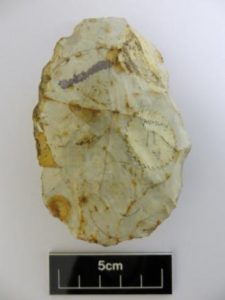 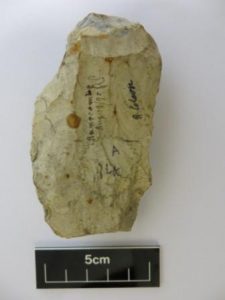 Locating and investigating any solution hollows in the Cobham Area and its environs.:

Solution hollows on the North Downs have been identified as a target area for investigation for a current palaeolithic project in East Kent.  They provide an option to fluvial contexts and the current project is based upon successful experience in locating palaeolithic material in East Kent over the last twenty years.

Solution hollows are natural depressions in the chalk formed by the solution of the chalk by chemical weathering which have subsequently been infilled by airborne, colluvial or fluvial processes during the quaternary.  Possible solution hollows can be identified from LIDAR views and aerial photography.  Ground truthing can then establish if they are natural rather than bomb craters or quarries – possibly by using an auger.

Further understanding of the geology of the area including the identification and mapping of flint sources that were possibly used for stone tool making:

An investigation of the present and past distribution of Sarsen stone in Cobham Village and its possible former use for a megalith and current use as a building material:

Isolated occurrences of a hard, quartz-cemented sandstone known as Sarsen Stone provided a local source of building material in the Medway area. These sandstones represent only the remnants of a much more extensive, largely un-cemented sandstone unit that covered much of the area during the middle Paleogene (tertiary.)

Examples of their use can be seen in the Kit’s Coty and Whitehorse megaliths, near Aylesford but sarsen stones have also been reported in the fields around Cobham village (and were used as cornerstones at Randall Manor.)

Further investigation of the wider Mesolithic Landscape in the area linking the Shorne sites with the Ranscombe sites and further afield:

We have already investigated several concentrations of Mesolithic flint tools in the area mainly in higher locations.  The wider Mesolithic landscape that links these sites can now be investigated to further explore its use by early Holocene people. Are the known sites seasonal tool preparation sites of nomadic hunter gathers?

Evidence for the earliest people to use the landscape after the last Ice age (final upper palaeolithic) has been recently discovered at Ebbsfleet Green, just north west of the Cobham landscape and also possibly at the Lidar 5 site in Shorne.  This evidence is usually at a lower level than the mesolithic.

This investigation can be part of all field walking activities.

Looking for evidence for later prehistoric activity in the Cobham landscape:

Later prehistoric flints spreads?  Neolithic or Bronze Age barrows or other earthworks?  Iron Age enclosure?  Are any of the boundary banks in the landscape prehistoric?  What is the earliest evidence for settlement?

Some standing archaeology in Cobham Village and around, investigating the building stone used:

How much is from local sources?  What materials did the quarries in the Cobham landscape produce?