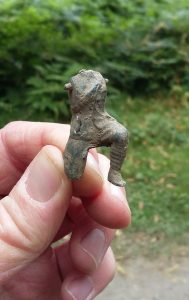 This is the lead soldier found at the Mausoleum Cottage excavation this year. Headless and with spigots for arm location, it is hollow model of the size and type that W. Britain manufactured from 1893 onwards. It is said to have set the standard for that part of the toy industry.

Britains Ltd progressively expanded their range to over the years include other figurines, animals, vehicles and associated items to build into appropriate dioramas. Between the wars they made up to two million items a year. 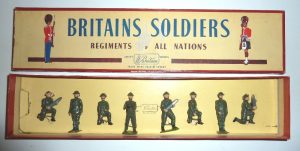 The current General Manager of Britains indicated that this is a Royal Artillery ‘Gunner’ and could have come from either Set 1725 [10 men with 4.5” howitzer] or Set 1730 [8 men], as both had shell carriers and other gun crew both standing and kneeling. These sets were available from 1939 until several years after the end of WWII.

The model wears the 1902 khaki Service Dress recognisable from WWI with the leather bandolier available at that date. 1937 pattern Battledress and Web Equipment was already on general issue but had yet to become universal. A fair assumption is that these artillerymen, not being front line troops and only armed in the unlikely event of self-defence, would be later issue. There are photographs of infantry units of the 1940 BEF disembarking in northern France so equipped they that could be mistaken for 26 years earlier.

Above is a photo of a WWI soldier (wearing the same Service Dress and bandolier as the model) and a kneeling ‘loader’ – spigot attached arms meant the same basic ‘body’ could be ‘kneeling gun crew’.

The auction description of this set reads:

The sets were on sale in 1939, and all of the figures had the Mk1 style helmets painted grey. In 1940 the helmet colour was changed to green, so the above is post ’40.