An investigation into the the Gravesend crash of a USAAF fighter, on New Year’s Eve 1943

“I was ploughing when I heard a terrific roar of an aeroplane clearly in distress. The plough horses frightened by this broke into a gallop which I was able to bring under control. I went to look over the hedge and saw that a plane had come down in the field opposite The Crown Garage, now a car sales. I joined one or two other people who were running towards the plane and helped dig a hole so that we could get the pilot out as the cockpit and front of the plane were upside down, although the rear half was the right way up. The pilot was still strapped in so I used my penknife to cut him free, he was taken to Gravesend Hospital where he was found to have a broken arm, broken rib and a nasty gash to his hand. On its way down the plane had hit several poles which carried the electricity supply to several properties nearby leaving them with no power for any New Year celebrations. I later visited him in hospital and he confirmed he had run out of fuel on his way back to East Anglia and had tried to land on the road, not knowing that the Gravesend airfield was only a couple of miles away”. 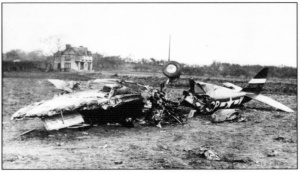 A photograph included in the document shows the remains of the crashed plane in a field with a banked road and a distinctive house in the background. These features along with the fact that it was field opposite to The Crown Garage have been used to establish an approximate location for the crashed plane – 51o 25′ 13.86″ North 0o 25′ 54.52″ East. 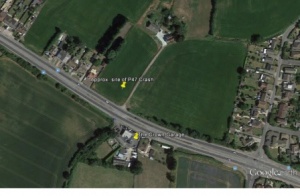 In the crash site photograph the front half of the plane is upside down with one wheel sticking up in the air. The rear of the plane is the right way up and has a number of very distinctive features. These include:

When the USAAF arrived in Britain with their unfamiliar aircraft it was soon found necessary to enhance the markings on various American aircraft. The P-47 Thunderbolt was the only allied fighter with radial engine and looked very much like the Luftwaffe Fw190. In March 1943 the VIII Fighter Command painted the P-47’s engine cowl white, added over-sized roundels on the underside of both wings and painted a white band to the tail fin and horizontal stabilisers. 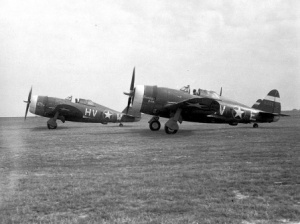 The 367th moved to England from the USA during September–October 1943. Equipped with P-47 Thunderbolts they began operations on 20 December 1943 and served in combat with Eighth and, later, Ninth Air Forces until V-E Day.

As noted in mission records of the 367th Fighter Squadron for the year 1943,  the injured pilot of Thunderbolt CP-X was Lieutenant Robert (Bob) H Fautt Jnr. Bob was born in Bryson, Tennessee, on October 29,1917. He went to West Point and in the summer of 1942 began his flying training at Randolph Field, Texas, where he was selected Cadet Captain during Basic Training. He received his pilot’s wings in December 1942 and graduated from West Point in January 1943. Assigned to the 367th Fighter Squadron he came with the 358th Fighter Group to England in September of that year.

Bob was on his 8th combat mission (see below) when the crash happened. He sustained serious injuries for which he was initially treated at Gravesend Hospital and later, returned to the United States for further treatment. Bob returned to full flying status in September 1944, and was ordered to Kissimmee Air Base, Florida, for flying duties with a P-47 squadron. On August 1, 1947, during the Air Force Day Show at Vernam Field, Jamaica, flying the only fighter in the show. Bob dived on the field in a P-47 and executed two slow rolls. At the completion of the second roll the aircraft lost speed, stalled, and crashed. He was killed instantly. His body was returned to his home in Pulaski, Tennessee, for burial which took place on August 18, 1947.

On the 31st December 1943 Fighter  P-47s, including the 367th Fighter Squadron,  escorts raids on Bordeaux through Paris. The 358th Fighter Group dispatch ran low on fuel on return and six aircraft crash-landed at various stations in England. The 354th Fighter Group IX Fighter Command contributes 33 P-51s to the escort.

On the 31st December 1943, 16 aircraft from the 367th Fighter Group took part in a bombing mission to Paris. They were to provide penetration, target and withdrawal support to heavy bombers attacking Paris. It was known that the returning aircraft would be short of fuel and arrangements were made for them to refuel at Manston. Unfortunately the reserves of fuel at Manston were too low on the day and therefore only nine aircraft could land and refuel. Orders were given for the remainder to go to various locations along the south coast. As a result of this change to the mission a number of aircraft run out of fuel before they could find or reach their alternate refuelling aerodrome.